A unit card is a card that represents a large scale military weapon featured in it's series. They can sortie during the battle phase to deal damage to your Opponent or to clash with your Opponent's forces. In this game, this card is known as a [Unit] 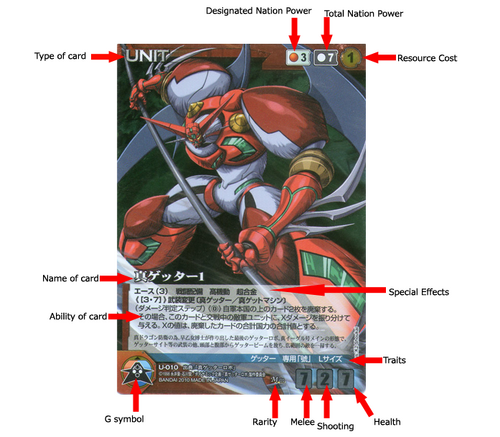 Quite literally, this is the name of the card. Nothing much to it, but there are however, certain trick plays with this part of the card, which will be covered later on.

This part of the card is important, as it determines what sort of effects you can play or automatically activates to alter the battlefield to your advantages (or in some rare cases, disadvantage).

If it's an effect that you can choose whether or not to activate, the timing of activation is stated next to the ability description (we'll explain the important of timing in another section). However, if it's an automatic effect, it activates without you deciding whether or not to use it.

The G Symbol is another important part of the card. A card with a G Symbol means that you can play it as a G and set it aside to give you a designated nation color and total nation power you have.

As you can see in the example, the G Symbol has two colors: Red and Blue. Notice the card is red? The color of the card determines the color of your G. Any sub-colors are secondary G colors. (This is only applied to all crusade series except for the original Sunrise Crusade, which only has one color per card). Simply put, think of G as mana in Magic.

There are several categories of rarity, starting from the lowest C (Common), UC (Uncommon), R (Rare), M (Metal), MP (Metal Parallel) and PR (Promotion). Think of M and MP as RRR and SP in WS terms. Although, for Crusade, every crusade series has a special rare foil (For example, OG has OGR, and Sunrise has SR) that's extremely hard to get, as there's only one in a few boxes.

There's three values here for fighting strength (starting from the left: Melee, Shooting and Health). Melee is the default damage output your unit deals when you send it to fight your opponent. Shooting works on when you send out two or more units, and only the 2nd unit onward can use shooting. Simply put, when you send out more than one unit, it's called sending a squad, and shooting basically replaces the melee when that unit is stacked behind another unit at the front.

Say you have two of the example card stacked and sent out in a squad. The total battle strength of the squad will be 7+2=9 (7 melee plus 2 shooting). Fighting strength will be changed when you set a character on or has a modifier effect placed on the unit (These will be covered later on)

Traits would affect the gameplay, albeit most of the time quite minimally. The traits shows you this unit's original pilot, how big is it, and what type of unit it's called specifically. Certain units and cards have special effects that requires you to make use of the traits to activate, such as custom machine set, which is basically setting the original pilot stated in the unit on it.

These special effects can alter your battlefield tremendously. These special abilites can affect your gameplay style. In Magic, this are the terms known as First Strike or Flying and Reach.

There are many effects out there and as there are too many special effects, we will be covering them in the later part of the tutorial.

This amount is the cost you need to pay in order for you to play a card onto the field. In WS, this is known as Stock, in Crusades this is known as Resource Cost. Resource Cost is paid directly from your Nation Power into your LCP, just think of it as sacrificing a bit of your health to summon out a very strong unit. 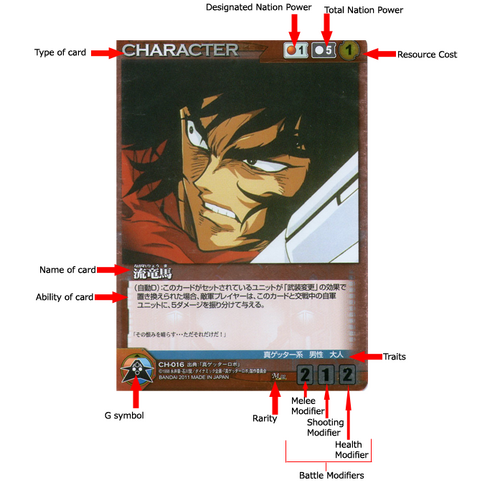 Now, Character cards are a bit special other than Unit cards. Imagine every robot in all the mecha anime out there requires a Pilot to work the machine. Well, works the same way for this game, however you dont need to have a Character set on to make the Unit attack, but the useful part here is it that it gives the Unit more effects and Modifiers to make it stronger.

However there is a restriction for Character cards, there can be only one card with the same name on the field. Using the card above as an example, I can only have one Ryouma on the field and I cant have anymore Ryouma's on the field even if the card is a different type of Ryouma.

Modifiers here will add on to the Unit which you have set on to make the card stronger. Using the Unit card above as an example, if i set on Ryouma onto Shin Getter 1, it will gain Ryouma's battle modifiers which is the 2/1/2. So your Shin Getter 1 would be a 9 Melee, 3 Shooting and 9 Health Unit.

Command cards are cards that represent the various dramas and events in the card's series. Although they are one use cards that is used and discarded from the Hand. If used properly, their effects can overturn the game. In this game, they are called [Commands] 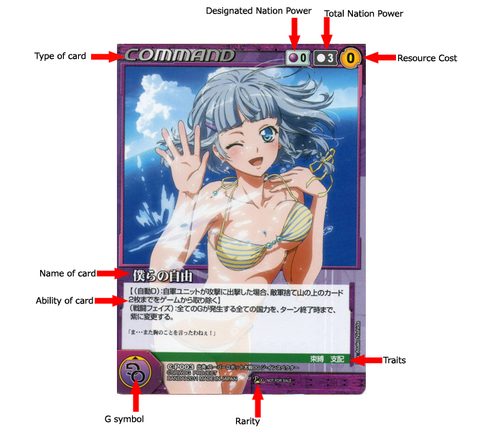 Now Command cards are quite different from Unit and Character cards. In Yugioh, you can consider them as Spell cards, in Magic, this are known as Instants. Certain Commands can only be played at certain timing of the battle or only if certain conditions are met. However, Commands are always known to help turn the tables against opponents and it can really change the field.

Community content is available under CC-BY-SA unless otherwise noted.
Advertisement