(The rules are written in Oracle text introduced in Feb 2013, words within grey bracket?are original text). The only exception is will be Auto X which will be omitted.

[Continuous] This card can sortie even when it is under [Sortie Restriction] of High Speed Battle's effect.

[Continuous]: If the attacking team(squad) this card is in is a team(squad) where every unit possess [Assault], any battle damage left over after being dealt to a clashing opponent team(squad) will be dealt to the opponent's deck(nation).

[Continuous]: If the attacking team(squad) this card is in is a team(squad) where every unit possess [Swift Strike], the battle damage this team(squad) deals is resolved at [Speed 1] timing.

-(Auto D) effects triggered during speed 1 or speed 3 will also resolve after the resolvation of the whole [ruling effect] of the damage resolution step.

(Auto B) If all [Ace (X)] of units the player controls on the field have a combine X value which is over the [Ace Limit] or will be if this card enters the field, this card cannot be played or enter the field.

The maximum capacity of the combined X value of [Ace (X)] per player, in a normal situation this value is 5.

Moving cards with an Ace value

If an effect moves a unit with [Ace(X)] such that the Ace Limit is exceeded, the resolvation of the effect cannot be resolved.

If the Ace value exceeds the Ace Limit

If the ace value exceeds the [Ace Limit] due to some sort of effect, the [Card Which Cannot Be Placed On The Field] rule is applied

(Auto B) When this card is played out on the field, unrest(reroll) it during the start of the Defense Step.

(Auto B) This card can be played in all free timing.

(Auto B) The [one play per turn] restriction does not apply for the play of this card. This effect can only be used by each player once per turn.

(Player return step) (0) Unrest(reroll) up to X of your unit except for this card.

(Auto A) If you have 2 or more cards with this effect in your team(squad), all the opponent unit clashing with this card gain -X/+0/+0.

(Auto D) When this card takes X or above effect(normal) damage, or is clashing with a team(squad) of X and above team(squad) battle strength during the start of damage resolution step, discard(abolish) 1 of your hand or one of your card. This effect only activates once per cut for each player.

(Auto B) At the start of every step, when this card is in your hand, you may switch this card with one of your unit with [Name: A]. However, you may not Equip Change to a unit with the same name as this card. Each player can only activate Equip Change once per turn.

(Auto A) When this card does not have a character set on, or this card fulfills a [Custom Machine Set], and you control a character or unit with [Name: A], you gain B's text or battle modifier.

(Auto D) During the start of the damage resolution step, if this card is sortied to attack or is clashing, the player may get 1 DP coin. This effect only applies once for each player per turn.

(Auto A) This card gains A's battle modifier or text if the player has DP coin(s). This effect does not apply if a character without [Trait: Driver] is set. Any X(variable) in this text refers to the number of DP coin(s) the player has unless stated otherwise.

(Battle Phase) (0 each) Discard a G you control. In this case, you may either unrest this card, or add 2 to one of you battle modifier by your choice. A card's accel can be activiated at most once in each step.

(Auto B) When this card is set onto units, it can only be set on units with the special text [Link].

(Auto A): This card can sortie into a battle area with a [High Mob] team(squad).

(Auto D) This card can be unrested(rerolled) whenever its controlling player plays a [Trait: Song] command.

(Auto A) When this card has a customization coin on it, it gains +X/+Y/+Z.

(Battle Phase) (0) Discard(abolish) the top card of your lost card pile. In this case, until the end of the cut, this card cannot be targeted by effects from opponent card of the same type as the card discarded(abolished) . Alternatively, this card cannot be targeted by opponent units effect with the same or lower TNP as the card you discarded (abolished) . 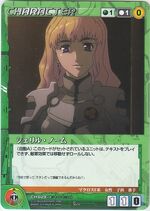 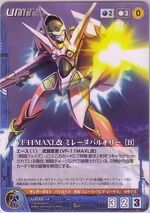 [(Auto D): When your [Sound Force] deals battle damage, a unit that receive this battle damage is moved to the owner's bottom deck(nation).. This effect only applies once per turn for each player.]

When the player controls character with [Trait: Singer], he may choose to play a [Trait: Song] command with the lower portion text demarcated by a music note in place of the regular effect.

For [Trait: Spirit] command, only when the player controls character with the corresponding [Trait: A] is he allowed to choose to play the command with the lower portion text demarcated by a [Spirit Name] in place of the regular effect.

-For example, if the text is demarcated by Hot Blood, the player must control character with [Trait: Hot Blood] in order to play the demarcated text. A consist of 5 different Spirit: Hot Blood 熱血, Concentrate 集中, Gain 気合, Trust 信頼, Lucky 幸運

(Freetime) (0 each) Player roll X of his G, in this case, apply the effect of A

(Auto B) When this card is played onto the field, you may reveal the top card of your deck(nation). If the card you reveal is from the same [Title] as this card, you may move the revealed card to your hand. This effect can only be activated by each player once per turn.

Refers to a specific combideck(nation) of Character and Unit. Namely, the character specified in a unit's [Trait: Custom ], and the unit itself. There are no specific benefits to fulfilling a Custom Machine Set, however the term is referenced in certain effects.

Card with the [Trait: Alias [ ] ] are also treated as card with the name specified in [ ] in the game.

Although the cost and timing of special text usually follows the special text's content, if specific timing or cost are written on the card's text, it will instead take priority over the generic text stated above.

(Auto B): This card cannot be played or enter the field if you control a unit of the same name as this card.

(Auto A): This card is treated as if it has a character set on Defense Step (1): Roll 2 of player G with the original description [Trait: Cosmo], in this case, unrest(reroll) this card.

Battlephase <<0>> When this card does not have a character set on, and sorties to attack or is clashing, the player look up to the top 5 cards of your deck (nation) . He may pull out a character that name is [A] or with [Trait: A], and set it on this card. (If possible)

Character's with battle modifier printed in red may sortie in the same team(squad) as [Link] units as [Backup]. They are sortied the same way as you would sortie a unit, however, they are not considered units, and are treated as character in the team(squad) instead. They do not belong to any order in the team(squad), and does not take any damage either. 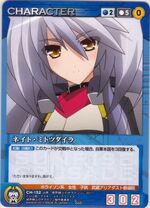 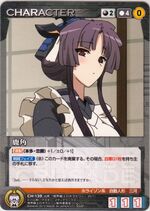 The following effect applies for characters that sortie as [Backup] (Auto D): When this card sortie, 1 [link] unit in this card's team(squad) gains the battle modifier of this card until the end of the turn

Unless altered by other effect. All cards that are original [Source Series] [Hikounin Sentai Akibaranger] are treated as [Unofficial] cards in-game.

[Official] Cards/ 公認様 Unless altered by other effect. All cards that are not original [Source Series] [Hikounin Sentai Akibaranger] are treated as [Official] cards in-game.

Auto(B): This card cannot be played out when there's a unit with the same name on your field.

Battle Phase: <(1)> When this card is clashing, search your whole deck(nation) for a card with [Trait: A], reveal it and add to hand. Shuffle your deck(nation) afterwards.

(Auto B) : This card gains the following text A if there are X or more cards in the Player's Junkyard.

Community content is available under CC-BY-SA unless otherwise noted.
Advertisement